A $ 29.2 billion contribution to GDP is expected from the deployment of 5G networks 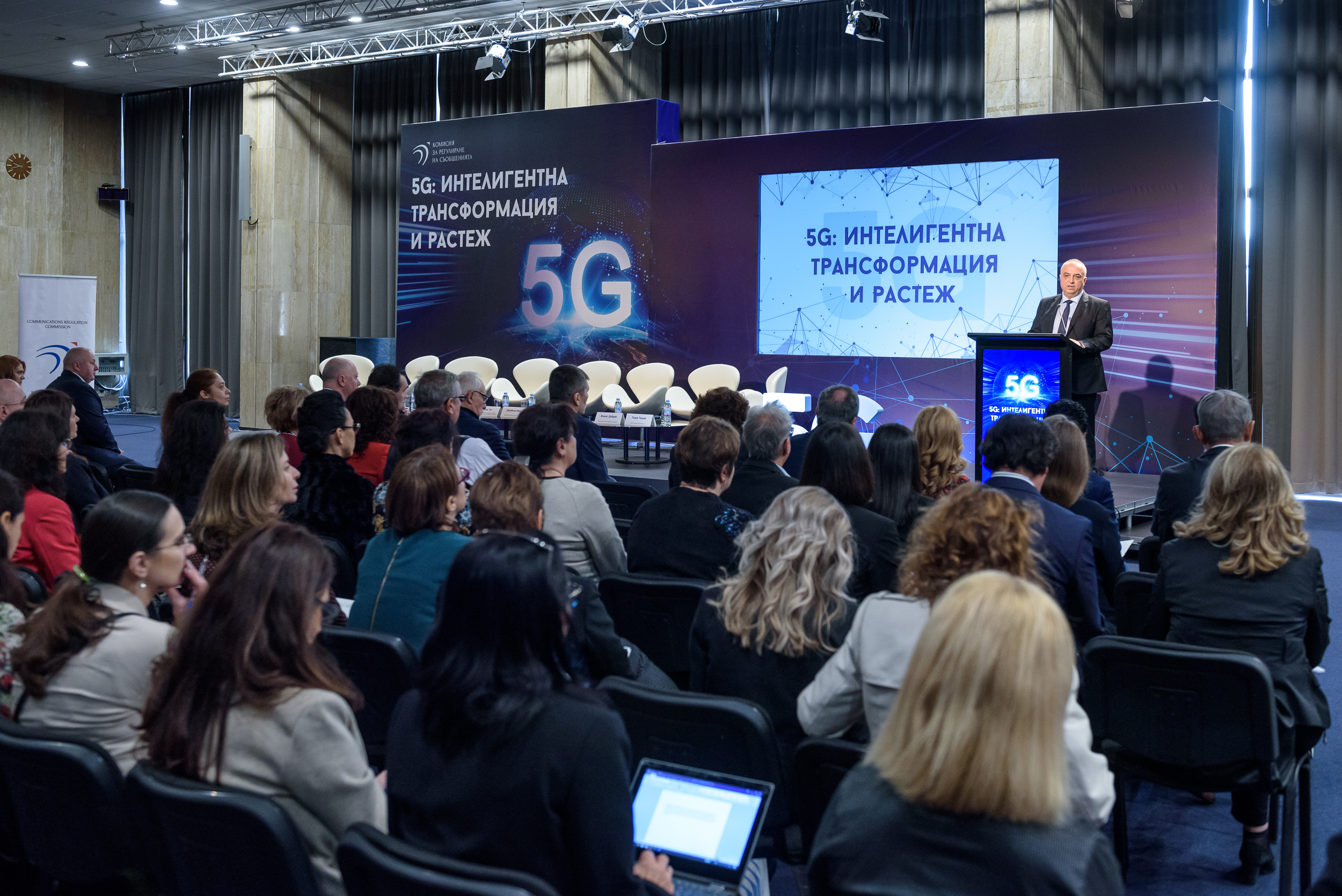 "The implementation of fifth generation networks will be the result of public policy and the aplication of a coordinated approach among all stakeholders," said Chairman of the Communications Regulation Commission (CRC) Ivan Dimitrov during the „5G: Intelligent Transformation and Growth” Forum.

CRC organized and hosted the first ever forum of all stakeholders in the process of implementation of the fifth generation networks in the country. The forum was attended by the Minister of Transport, Information Technology and Communications Rosen Zhelyazkov, representatives of the Ministry of Regional Development and Public Works, the Ministry of Health, MPs, representatives of the three telecom operators - A1, Telenor, Vivacom, the International Mobile Operators Association (GSMA) and experts.

"The speed of the deployment of 5G in Bulgaria is part of the European context," the Minister of Transport, Information Technology and Communications Rossen Jeliazkov said during the discussion. "It is clear that targeted investments cannot be other than market-oriented, and in order to stimulate consumption, measures such as reducing the initial and annual charges levied on spectrum use will need to be considered," said Rossen Jeliazkov. He added that the Council of Ministers would soon make a change in the tariff of these fees.

Currently, the legal regime of construction of a mobile station is equal to with the requirements for a hydro-electric power plant, the Minister said. According to him, these procedures should be relieved, but in compliance with sanitary and hygiene requirements. "We shall reduce the administrative burden, but we shall strengthen health controls," he explained. The Minister added that measures to optimize spectrum tariffs and reduce administrative burdens, while maintaining all the considerations that guarantee safety and health, should be comprehensively considered and should work within the system.

The representatives of the three telecom operators outlined the main problems within the sector related to the introduction of 5G technologies, such as the need to release additional spectrum, a new tariff for license fees for use of this spectrum and change of the existing constructing regulations and once again they expressed their satisfaction with the ongoing dialogue between the business, the government and the regulator.

"Releasing the required spectrum as soon as possible, under the right conditions and way, as well as at the right prices, will have a huge impact on the deployment of 5G," said Laszlo Thoth, Head of Public Policy for Europe at the International Mobile Operators Association (GSMA). ”The creation of a stable environment and predictability in terms of government policies and regulations is crucial to the long-term investment in 5G", Laszlo Thoth added.

5G will increase the range of services in many sectors of the economy - energy, road and rail transport, banking and healthcare, as well as industrial control systems, according to Ivan Dimitrov.

"The launch of 5G and the impact of technology on socio-economic development will be best felt in the public sector," said Prof. Ph.D. Stati Statev, Rector of the University of National and World Economy (UNWE).

A study by the UNWE Institute for Politics and Economics presented at the forum shows that by 2028 the introduction of 5G technologies will lead to a growth of the Bulgarian economy and a contribution of nearly $ 12 billion in all possible sectors of the economy, including healthcare and agriculture, under the application of artificial intelligence and robotics using 5G. Contribution to the GDP of the Internet of Things in the context of using 5G will reach $ 15.2 billion, and an increase in e-commerce could add another $ 2 billion.

The health aspects of the introduction of 5G technologies are subject of research by a team of leading specialists in the field of internal diseases, oncology, cardiology and neurology, led by Prof. Kosta Kostov, National Expert in Pulmonary Diseases, National Consultant of the NHIF, scientist, professor and public figure. During the discussion, the results of various researches on mobile health technologies were discussed.

"The requirements for the threshold levels of electromagnetic radiation from antennas for mobile networks in Bulgaria are at least 45 times more stringent, and in some frequency bands even up to 100 times more stringent than the requirements adopted in most EU countries" said Professor Kostov. While complying with the requirements for the threshold levels, there is, to date, no strong justification based on the available scientific data to accept the existence of a reasonable health risk.

"Until now, there is no reliable and scientifically valid link between electromagnetic fields and the occurrence of tumors," said Assoc. Prof. Chilingirova, a specialist in medical oncology and a member of the team who has studied the data of the scientific research made so far. According to her, it has not been proven that using a mobile phone leads to a higher risk of brain cancer and that there is still no research data available with the new 5G technology that proves that 5G carries a greater risk than current technologies.

The representatives of the state, regulator and the telecom operators confirmed their intention to work together on all health aspects related to the introduction of 5G networks in Bulgaria.

"This was a necessary discussion for 5G, which managed to address all the important topics in the process of implementing the new technology. The role of CRC will be to act as a mediator so as to balance dialogue, inform the public and ensure a good environment for the introduction and use of technology important for the social and economic life of the country, such as 5G", Ivan Dimitrov concluded.